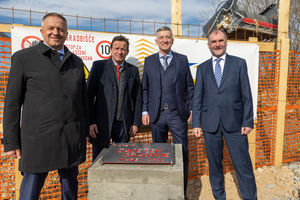 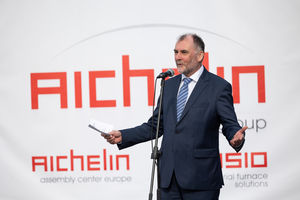 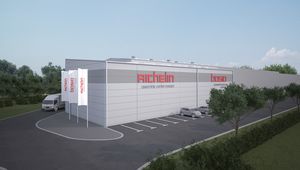 AICHELIN Group is expanding its capacities for the assembly of heat treatment plants and will build a new industrial assembly hall, the AICHELIN Assembly Center Europe, right next to its Slovenian subsidiary Bosio. In the medium term, this is going to be the European site to produce all heat treatment plants of AICHELIN Group. The expansion of production capacities that comes with this step, including extensive testing possibilities, will further strengthen AICHELIN Group's leading position. A total of 7 million euros will be invested in the location and more than 30 new jobs will be created. The laying of the foundation stone took place on 3 March 2022 and the first furnaces will be produced there as early as September 2022.

On 3 March 2022, construction was launched in Celje, Slovenia, of a new production hall for the assembly of heat treatment plants by AICHELIN and Bosio. AICHELIN Group of Austria is the main investor, and as Bosio's parent company, AICHELIN will also be expanding its production capacity. The entire plant will have a size of 4,700 m2 and will be located directly across the street from the Bosio operations building. To ensure that the value added remains in the region, a Slovenian construction company was commissioned with the project through a tender.

"This shared production facility is a real milestone for the strengthening of our cooperation within AICHELIN Group. In the long term, the AICHELIN Assembly Center Europe will become a manufacturing and testing hub for all AICHELIN subsidiaries in Europe. We are investing over 7 million euros in Slovenia because we are convinced that this is the right business environment for us and that we will find highly qualified staff here. This will strengthen our competitiveness on the market and will solidify AICHELIN's leading position as a manufacturer of heat treatment plants," says Dr Peter Schobesberger, CEO of AICHELIN Group.

The project will be carried out in three phases: The first phase will include the construction of a 2,000 m2 assembly and warehouse building. As of early September 2022, complex heat treatment plants will be produced there, which will be shipped to customers in Europe and around the globe. Phases 2 and 3 will see the further expansion of the assembly hall as well as the creation of additional warehouse facilities.

"Due to the increased order volume, AICHELIN Group is already coordinating the planning of additional phases, which are foreseen to be completed by August 2023. Eventually, the new manufacturing site will span 4,700 m2 and create more than 30 new jobs. This way, we are creating a renowned, international center for the production and assembly of industrial heat treatment plants in Slovenia," says Hugo Bosio, CEO of Bosio happily.

About BOSIO
BOSIO, a Slovenian manufacturer of industrial furnaces, is a subsidiary of AICHELIN Group and ranges among the leading manufacturers and service providers of the heat treatment industry in Central and Eastern Europe. The company was founded in 1990 and produces mainly large chamber furnaces, bogie hearth furnaces, and shaft furnaces as well as roller hearth furnaces and belt furnace plants for customers in the steel processing industry for massive forming or cast components. Bosio's export markets are primarily Western and Eastern Europe, but also India. The company's headquarters are located in Celje, where they employ more than 80 people.
https://www.bosio.si/en

About AICHELIN Group
As part of Berndorf AG, AICHELIN Group, with its headquarters in Mödling near Vienna, is a leading provider of heat treatment solutions. This includes industrial furnaces, induction hardening plants, industrial heating systems, control and automation systems, Industry 4.0 solutions as well as other services. The company's roots date back to 1868. The long-established brand AICHELIN, as well as AFC-Holcroft, EMA Indutec, SAFED, BOSIO, and NOXMAT, make up the group and together employ more than 1,000 people. AICHELIN Group ranges among the world's top 3 heat treatment companies. AICHELIN's subsidiaries in Europe are located in Austria, Germany, Slovenia, France, and Switzerland; the worldwide presence of the company includes subsidiaries and branch offices in China, India, and the US, as well as a sales network in 22 more countries. https://www.aichelin.com/en