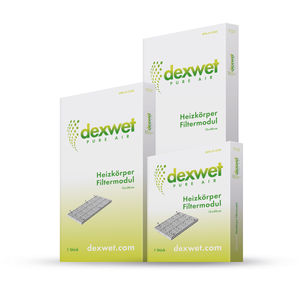 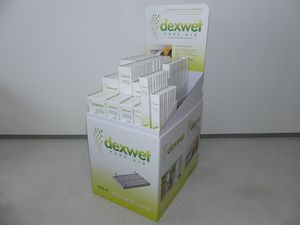 TV advertising to boost sales of radiator filters in Austria

Vienna, Austria (ptp011/30.11.2018/09:50) - "dexwet pure air home" (dpa-home), an innovative and passive room air filter system developed and designed by dexwet international AG based in Vienna (Austria), is now distributed throughout the country by the Bauhaus retail chain. The internationally patented air filters consist of oil-coated plastic lamellae, which are attached by magnets to the underside of common heat radiators. The permanent cleaning of room air is done utilizing the natural convection air flow of the radiator without any further energy costs. http://www.dexwet.com

At the same time as the Bauhaus cooperation goes live, a TV advertising agreement for Austria was concluded in order to push the reputation and benefits of the new radiator filters - better room air for easily irritable breath airways and allergic people. For this purpose, "dexwet pure air" filters are being promoted for the first time by TV spots on Austrian television. The smart indoor air filtration system, which was developed with the support of the Austrian state (AWS), has been available for the commercial sector since the beginning of 2017. Up from now it is also available for private households and will be exclusively distributed by the 19 Bauhaus branches in Austria this heating season.

The company is prepared for large-scale sales of dpa filters. "Thanks to our partners and motivated employees involved, we were able to produce as many dpa filters over the summer as never before to be prepared for this beginning heating season," says dexwet CEO Clemens Sparowitz. The head of the Austro-American filter manufacturer considers the move as another milestone on the way to the US stock market. "Only with growing sales figures, we lay the basis for the best possible assessment in the run-up to the IPO."

Responsible for the promising dpa-home launch is dexwet sales manager and "veteran" Juergen Kettinger, who has set himself concrete sales targets for 2018. "With television advertising that works better, because the high benefits can be brought to the point especially for allergy sufferers and asthmatics." Austria should serve as a test market. "What we succeed here can then also work well through other sales channels and in other countries in Central, Eastern and Northern Europe. The production of dpa filters can already be ramped up to full capacity in February in order to be prepared for the Europe-wide roll-out and the 2019 heating season."

Dexwet is an Austro-American technology company specializing in the advancement and commercialization of the patented Dexwet wet-filter technology. Dexwet filters are durable, high quality and can be easily recycled and reused multiple times. Originally developed to effectively remove particulate matter emitted by heat-sensitive equipment, Dexwet today offers a broad range of customized solutions for particle sizes from raw to ultrafine dust. The extreme air permeability of the Dexwet filters, combined with high filter efficiency, translates into energy savings and improved performance.

For end users, and especially for allergy sufferers, asthmatics and those with respiratory diseases, Dexwet offers a uniquely effective range of products that provides clean breathing air at home and at work. With innovation partners, its wet filter technology is being brought into new fields of application, with technology partners Dexwet is developing industry-oriented applications and setting new filter standards that make the whole production processes more environmentally friendly and at the same time reduce costs significantly."