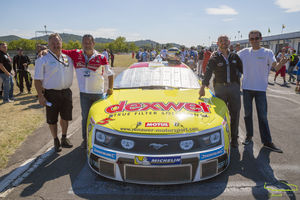 Dexwet air filters will have a key role in the technical upgrade that the NASCAR Whelen Euro Series will bring to the track with the new "game-changing" 2016 car that was unveiled at Zolder. Thanks to their advanced patented technology, the Dexwet High Performance Air Filters will increase the car's performances and energy efficiency, as well as its environmental sustainability.

"We are really excited about this," said Jerome Galpin, NASCAR Whelen Euro Series president and chief executive officer. "Dexwet provides us with a great product, which is definitely one more asset for our new 2016 car - a gain in performances but also an improvement to reduce our emissions. This is important for the future of motorsports. Everybody at Dexwet is very motivated and passionate and we are all here to collaborate this way on a long-term basis."

Dexwet technology was originally invented to fine dust emissions of office equipment like laser printers and copy machines. Its partnership in the NASCAR Whelen Euro Series represents a unique foray into auto racing.

"We are here to stay and we are going to grow together," said Clemens Sparowitz, Dexwet chief executive officer. "Thanks to the new Dexwet air filters, all 2016 NASCAR Whelen Euro Series will show improved max torque at lower rpm. The drivers will be able to shift earlier and therefore achieve a higher speed. Thanks to that, the competition will even get closer and tougher."

As an active participant of the NASCAR Whelen Euro Series since 2014 thanks to sponsorship of Team Renauer Motorsports, Dexwet developed an improved air filter system for the given air-box of the 2016 car. The new plug-and-play filter inlet is the first motorsports product based on the Dexwet fine dust-filter technology. It improves both the engine's performance as well as its efficiency. The high air permeability of the Dexwet filter provides the carburetor with sufficient volumes of clean air at the right time, as necessary for an optimum combustion and optimized engine efficiency.

"We will keep on innovating to provide NASCAR Whelen Euro Series with further steps forward, such as filter options to reduce fuel consumption while improving motor performance and we are looking forward to further beneficial applications of our technology. We think that driver safety and well-being should be our main focus and we are searching for partners to develop an improved helmet air ventilation system for our drivers," said Erich Peteln, Dexwet chief technology officer.

The Dexwet High Performance Filters will make their official debut in the NASCAR Whelen Euro Series at Valencia, Spain on April 22-24, 2016 as the Circuit Ricardo Tormo will host the season opener in the contest of the Valencia American Festival.

The NASCAR Whelen Euro Series was founded in 2008 and established the NASCAR official European Series in January 2012 thanks to a long-term partnership signed with NASCAR (National Association for Stock Car Auto Racing), Team FJ, a Motorsports company located in Blois, France, and Whelen Engineering as title sponsor of the Series.The season is made up of 24 races, equally split among ELITE 1 and ELITE 2 divisions, on the best European tracks. Euro NASCAR introduced a stunning innovation on July 7-8, 2012 by organizing the first ever NASCAR race on an oval track in Europe on a half-mile speedway built in the downtown of Tours (France). With four races in two days, these 400 HP V8 monsters provide pure racing action and thrilling bumper-to-bumper battles as well as a lot of family fun around the track! In the pure NASCAR tradition, race fans can get closer to the action than ever and feel the unique in Europe paddock atmosphere thanks to drivers, teams and cars always available for the spectators.The series attracts drivers from all over the world, all willing to fight on track for the win and take the first step towards becoming a NASCAR star in the U.S.

Dexwet technology is a new technology and class of filters that were originally invented to protect from fine dust emissions of office equipment like laser printers and copy machines. First patents were granted in the USA in the year 2002. In 2005 the first consumer products were brought to the market, up from 2008 Dexwet diversified into new areas of application and entered the pharmaceutical and the gaming industry with its filter technology. In 2011 Dexwet International AG was newly established to take over all business & IP assets of the preceding companies.
Compared to all existing dry filter technologies, Dexwet filters utilize a completely different physical principle to filter dust particles from airstreams. No matter what size the particles have, they hook to the filter for different reasons than conventional. All particles are permanently bound in the oils surface of the filters. Raw dust particles contribute to the filter effectiveness in the first stage of the filter useful lifetime!!! Highly effective - micro- and nano-dust particles are finally bound by the filter staves and their moistured oily surface. So dexwet filters are a technical paradox, they filter best the smallest particles while being highly air permeable. Any dry filter medium needing to intercept micro or nano-particles would restrict the airstream tremendously in comparison.

All Dexwet-class filters can be reused several times. After usable lifetime, when the filter needs maintenance in its specific application, the customer can take out the filter, wash it at high temperature in a conventional dish washing machine. "You take out the clean filter element, make sure it is dry and re-moisture the staves with our Dexwet service-kit. It's as simple as that," explains inventor Erich Peteln regarding the key recycling-feature of all Dexwet class filters.

Dexwet International AG is a game-changing filter technology specialist that holds a framework of more than 40 patents in the USA and Europe as well as other regions. Dexwet constitutes a new class of filters, a new technology cycle that shall create a new sustainable human practice and habit - self-maintaining filters correctly: unplug - wash - moisture - re-plug, repeat several dozen times when filters get full. Dexwet technology was invented to filter fine dust emissions of laser printers and copy machines. In the meantime, Dexwet diversified applications to multiple industries. Dexwet supplies major industry customers with customized filter solutions, in pharmaceutical, gaming (slot machines) as well as the ATM industry. Since 2014 Dexwet focuses on new consumer solutions for in-room air quality as well as for the automotive industry. Dexwet is highly competitive. Without any compromises more economic, more ecologic and in addition also socially beneficial. All three aspects fulfilled make a technology, good for a new technology cycle. Dexwet technology is open for licensing and cooperation and is making its way to global markets in various industries. First movers grab their strategic advantage while integrating the value potential of Dexwet technology.