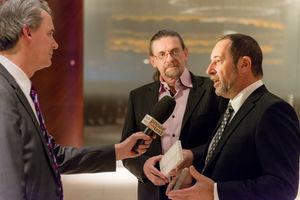 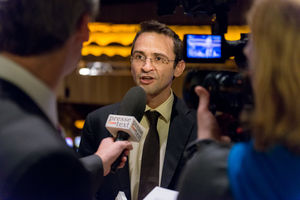 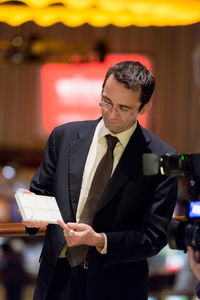 Vienna (pts019/12.12.2014/13:45) - Austro-American filter manufacturer dexwet International recently introduced its new room air filter system "dexwet pure air" at Frank Stronach's Magna Racino in Ebreichsdorf. The filter system is primarily intended for use in schools and kindergartens where the fine dust air pollution is particularly high and often harmful to health. The "world's first - made in Austria" will be available already from the beginning of 2015. It will be distributed via a region-wide network of plumbers and installers. "20,000 units will be produced monthly", dexwet-CEO Clemens Sparowitz said. http://www.dexwet.com

The multifunctional room air filter "dexwet pure air" is a modular filter system, to be attached simply and comfortably - by means of a magnet - to every commonly available radiator at its bottom. Thus, the problem of dust in residential and occupational areas as well as in public buildings can be handled at its very basis. The room air is purified from coarse dust and fine particles continuously. The process is inaudible and imperceptible to the user. Pathogens and allergens, too, are filtered out with high degree of efficiency and are decontaminated reliably. The new filter system has been developed by the founder of dexwet, Erich Peteln.

The filter system works like a silent vacuum cleaner. The air floats around the radiator permanently, also during the non-heating periods due to the so-called "tunnel effect"; the air throughput then is about 30% compared to the heating period. dexwet pure air purifies the room air also when the radiators are not operating. By reliable filtration and killing of pathogenic biological particles, the risk of infection can be largely reduced.
According to the management of dexwet, one can expect in the long run a decrease in the sickness absence in buildings equipped with "dexwet pure air" filter system. Furthermore, the system contributes to alleviate dust allergies and respiratory complains of children, and it protects from other forms of fine particles hazardous to health.

While launching the product in the market, the focus has been on public buildings. The incidence of allergic and asthmatic diseases due to the growing fine particulate pollution is evidently on the increase during the recent decades. In particular, children and younger people are the frequent victims. The suffering caused to this segment of the population, namely the patients of dust and pollen allergies and the asthmatics, gave the impetus to develop an effective solution to counter the problem.

The room air passes through the attached filter ten times a day on the average. During every air throughput, up to 80% of the particles are separated and bound. The ongoing operation and the repeated air throughput enable thus a high degree of purification of the air. The purifying effect is evident soon after attaching the filter and start-up of the heating system. The dust is collected at the bottom of the filter; the dust layers can be easily removed by a vacuum cleaner. The invisible micro and nano particles are continuously and reliably drawn and absorbed by the carrier fluid. The effectivity of the filter thus remains constantly high for a year without hampering the airflow of the radiator.

dexwet International is a specialist for innovative filter technologies and holds many patents in the USA and Europe - see the list on: http://www.dexwet.com/investor-relations/patente/ Its unique filter system separates coarse dust, fine particles as well as micro dust effectively and reliably. Moreover, very high air permeability is one its salient features.

dexwet has been producing and marketing its filter systems as fine particle filters for office equipment (printers, copying machines, fax machines), in the pharmaceutical industry, gambling industry (slot machines), and for ATMs. Since 2014, the company is working intensively on solutions for automotive industry and interior space filtering. http://www.dexwet.com