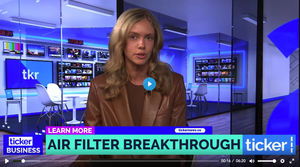 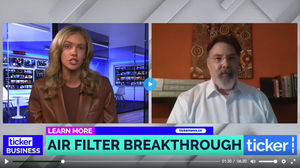 Vienna/Melbourne (ptp009/05.03.2021/10:30) - The field study by the Institute for Interior Analysis in the Lower Austrian elementary school Hainfeld is making waves as far as Australia. The digital news channel Tickernews.co reported last week a "breakthrough" in efforts to protect children in classrooms from unwanted particulate matter, pollen and even corona viruses. For this purpose, the CFO of Dexwet Filters, Gregory Scott Newsome, was interviewed about the study to validate the effectiveness of Dexwet's Pure Air Filters in a classroom setting. https://tickernews.co/programs/gregory-scott-newsome-air-filter-breakthroughmp4-44c809

The finance manager of Dexwet explained how the revolutionary wet filter technology in Dexwet filters works through ordinary air convection simply by circulating cold-warm air, without electricity, chemical agents or mechanical devices. When asked when and where the filters will be available, Newsome said Dexwet would roll out in the US, Asia and Australia by the end of the year. By then, an American production site is to be set up in addition to the European one. The product uses components from all over the world which are currently being assembled in Austria.

Austria's leading air quality expert, Prof. Peter Tappler is leading the study to measure the air quality in the elementary school classroom. The mayor of Hainfeld, Albert Pitterle, is the first to use the filters in his community, especially in schools, kindergartens and public buildings. Pitterle and elementary school director Herta Smetana supported the study to provide healthier indoor air for children and teachers so school operations can function normally.

The aim of the field study is to collect indoor air data under scientific conditions and thus to make a comparison between the recommendations of the Minister of Health (ventilate the classes every 20 minutes) and those of Dexwet (installation of noiseless radiator filters, ventilation only during breaks). In addition, it will show how easily the filters can be mounted on the radiators and - in comparison to noisy, energy-guzzling room air purification devices - how inexpensive they are to buy and operate - not to mention their lasting effect in warding off pathogens such as viruses, bacteria, pollen and particulate matter.

More photos from the start of the field study on Fotodienst.at: https://fotodienst.pressetext.com/album/3752

About Dexwet Holdings Corporation
Headquartered in the U.S., Dexwet Holdings Corp. is an air filter manufacturing and technology company with more than 60 patents, the first of which was filed in 2000, to mitigate fine dust particles effectively. The company has grown to develop and commercialize its patented wet air filter technology which has now been selling in Europe for homes, commercial properties, and custom business applications for more than 15 years. Dexwet was built on a mission to have a positive effect on health by providing clean air for humans and machines. In 2021, the company plans to launch its products into North America. More info at http://www.dexwetholdings.com