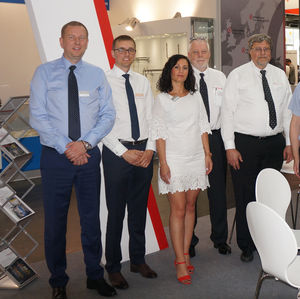 The move was necessitated by the pending retirement of Marc Ruetsch, the current Director of European Operations, who has announced he is stepping down in mid-2020.

The new Director of European Operations, Marek Kedzierzynski, will be based out of Poland, and all activity related to AFC-Holcroft's business in Europe will continue seamlessly from this new location.


The new address in Poland is already in full operation, with any existing business activity actively being moved from Switzerland. The complete change-over to the new location in Poland, including all address and telephone, is expected to be finalized by May,1st 2020.

"We're excited to have Marek as a key member of our team" said Tracy Dougherty, Vice President of Sales. "His industry experience and knowledge of equipment and metallurgy will provide our customers with the outstanding service and support they've come to expect from AFC-Holcroft. We look forward to Marek's contributions as we continue to grow the European and Russian markets"

About AFC-Holcroft
AFC-Holcroft, founded in 1916, is one of the leading manufacturers of industrial furnace systems used in the heat treatment of ferrous and non-ferrous metals. The company has approximately 120 employees globally and has been part of the AICHELIN Group since 2016.

AFC-Holcroft produces high quality thermal processing equipment used in the production of metal components, and provides related aftermarket service. Customers include both captive and commercial heat treaters who supply components to various industries such as automotive, heavy truck, industrial bearings and gears, railroad, fasteners, mining, aluminum heat treatment, and others. The company is headquartered in Wixom, Michigan, USA and has its own subsidiaries in China and Poland as well as a global partner network in Australia, Brazil, India, Mexico and Spain. http://www.afc-holcroft.com

About Berndorf AG
In 1997, AICHELIN Group joined the Austrian Berndorf AG, a holding company composed of global medium-sized industrial businesses for niche markets. Their core areas are tool manufacturing, automotive systems, heat treatment, belts and belt systems, press plates, stainless steel swimming pools, process engineering, and mechatronics. Berndorf stands for solid organization and long-term, stable investments. The group's strength lies in their know-how, experience, skill, and international networks. The companies which make up Berndorf AG are among the leading international businesses in many of the key sectors of the industry. The subsidiaries and affiliated companies of Berndorf AG currently employ around 3,100 people in more than 20 countries worldwide. http://www.berndorf.at