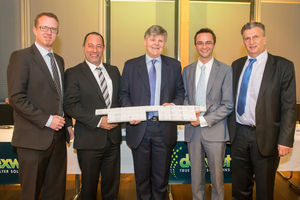 Vienna (ptp014/10.04.2015/13:30) - Dr. Wolfgang Schiketanz (60), capital market expert of Schiketanz Capital Advisors, is the new Chairman of the Board of Austro-American filter manufacturer dexwet Interational AG. He was elected unanimously at the Annual General Shareholdermeeting of the company on Thursday evening in Vienna. Dexwet looks back on a successful year of growth in 2014 and has doubled its sales again, said CEO Clemens Sparowitz. A capital increase of about 700 percent is planned before summer. http://www.dexwet.com

In the third year after its founding in 2011, dexwet was again able to grow, specifically by 166%, with a balanced EBITDA. The company thus is viable on its own, all costs could be borne by turnover, Sparowitz said. The track record of dexwet was topped in addition by an AWS financing (public subsidy) for its automated robotic production last year. Thus dexwet now relies on a new production method for large volumes of filters for industry and commerce. Previously, the products had to be assembeld partly by hand. As a partner for this procedure the Elmer precision technology could be won in Lower Austria.

The launch of the new air filter system "dexwet pure air" is developing according plan, the board reported. The new sales team Germany that recently started activities could announce a first major success concerning the liststing of the product in two of the three largest heating and plumbing wholesalers in Germany. Thus, big sales of air filters are probable in the near future. However, dexwet also needs a massive expansion of production capacities, for which the capital increase in summer becomes necessary. In 2015 dexwet again plans to double its sales and for the first time also a net profit, the possible break-even is planned for 2016.

The 85 shareholders present at the general meeting approved in a test vote with unanimous consent the proposed measures to strengthen the capital base and further grow the company. The increase in equity to around 40 percent is the basis on which the company can later issue bonds to finance the further growth, explained Sparowitz. In all other areas, the company is positioned for growth, particularly in the automotive segment. The engagement of dexwet in the European NASCAR racing series 2015 should result in the use of dexwet filters in all NASCAR racing cars in the season 2016.