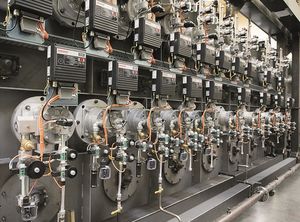 Cremona/Oederan (ptp016/16.05.2019/09:30) - Italian steel group Arvedi Steel with headquarters in Cremona to use high-velocity burners by Noxmat from Oederan (Saxony) for their industrial furnaces. The modernization of a roller hearth furnace at Arvedi subsidiary Metalfer in Roe Volciano near Brescia was a successful pilot project; it was upgraded to 37 burners with 40 kW each. Dr Efisio Carutti, Noxmat representative in Italy, considers it a real coup, as the market for the new generation of high-velocity burners in Italy is still small. The next plant conversion on the Metalfer site is already scheduled.

The recuperated and industrial burners by Noxmat have become irreplaceable for the heat treatment of metals and metal sheets as they have a considerably higher performance and a lower gas consumption, thus significantly reducing the cost of energy. For the recently completed modernization and maintenance project at Metalfer (Arvedi Steel Group), the Noxmat burners were provided for an existing roller hearth furnace of a German furnace maker with a performance of 4 tons of steel tubes per hour at furnace temperatures between 560°C and 930°C. The conversion was carried out by Italian specialized companies and accompanied by the Noxmat experts.

Conversion within only six weeks

The upgrade of the extremely heavy roller hearth furnace was mastered within the minimum time frame of six weeks, meaning that production could be resumed after only a short interruption. Metalfer factory manager Angelo Battistel is very satisfied with the conversion: "The Noxmat burners are an absolute must for our plant. Now, we are able to increase performance and output while reducing our natural gas consumption at the same time. This means considerable cost savings."

Noxmat Italy representative Efisio Carutti is an engineer and manager of the family business Carutti S.r.l. The company has been working in the trade and sales of tooling machines and industrial furnace plants for four generations. The Carutti family also entertains a long-standing relationship with Cremona, city of violin makers, and with Arvedi Steel. Together with the "Wonder" company, they produce valves for car and truck tires here in Cremona. Cremona is also home to the new Stradivari museum by Arvedi, as well as to the Museo Civico Ala Ponzone; Father Carutti left him a collection of 60 lutes and guitars, illustrating four centuries of violin making. The collection is extremely rare and in extraordinarily good condition, making it one of the most important of its kind in the world.

About Arvedi Group
With around 3000 employees in production and processing, the Arvedi Group generates approximately 5 million tons of steel products per year with a turnover of close to 3 billion euros. They work mostly in the area of Cremona (northern Italy) and in the Balkans, Poland, and Brazil via subsidiary companies such as Metalfer. Founder Giovanni Arvedi (* 1937) developed the ESP process (direct linkage of casting and rolling) and revolutionized the low-energy Endless Strip Production of flat steel. With numerous innovations and patents, the group has evolved into one of the leading European companies in the metal industry. The new Stradivari violin museum in Cremona also bears its name. http://arvedi.it

About Noxmat
Noxmat produces industrial burners and highly efficient recuperated and high-velocity burners made of steel or ceramics, steel tubes, and gas control systems. Besides development, construction, manufacturing, and sales in more than 30 countries worldwide, Noxmat also specializes in the modernization and servicing of heating systems in industrial burners. The Noxmat headquarters have been in Oederan (Saxony) since 1992 as well as in Hagen (North Rhine-Westphalia), with subsidiaries in China and India. http://www.noxmat.com