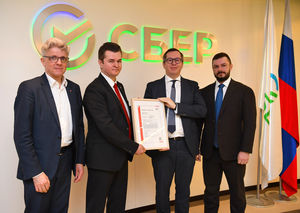 Moscow/Vienna (pts022/08.04.2021/09:30) - Data breaches all over the world have exploded from 157 mio. in 2005 to over 1 billion breaches by 2020 according to statistics site statista.com. Sber Group is the leading Eastern and Central European financial institution with more than 100 million customers. To protect services, infrastructure and customers, Sber Group operates its own dedicated cloud and AI provider, the SberCloud company, which regularly verifies the level of security of its IT-systems.

SberCloud forms the core element of Sber Digital Ecosystem, offering a wide range of infrastructural cloud solutions. These include unique cloud tools based on the "Christofari" supercomputer, one of the world's top performance workstations, which are powered by Artificial Intelligence. Major testing, inspection and certification company TÜV AUSTRIA, which has recently introduced the world's first TRUSTED AI certification scheme, was tasked by Sber with independent audits of its SberCloud according to the ISO/IEC 27001, 27017 and 27018 standards.

Covering information security management, cloud security and personally identifiable information (PII) security, TÜV AUSTRIA's auditors thoroughly checked SberCloud's adherence to the ISO/IEC standards. Yevgeny Kolbin, SberCloud CEO, was satisfied with the positive audit reports: "Being awarded independent TÜV AUSTRIA certification proves our company's maturity, the high level of SberCloud's cloud and artificial intelligence services". Kolbin continued that a successful certification was also a deeply personal reward for SberCloud's staff: "Certification is such a gratifying experience for all our staff, whose efforts reflect their commitment to offering our clients only the most secure and well-protected cloud-based services".

Reflecting on the positive audit report, Dmitry Yartsev, general manager of TÜV AUSTRIA Standards & Compliance, observed on the occasion of the certification award ceremony at SberBank's headquarters that a veritable benchmark had been set: "Defending its digital ecosystem user-base with the trident strategy of ISO/IEC 27001, 27017 and 27018 certification, SberCloud has reached the highest possible level of information security management".