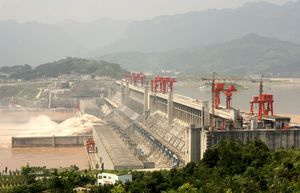 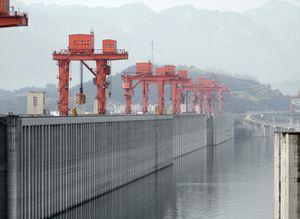 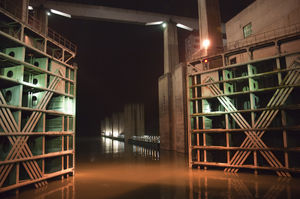 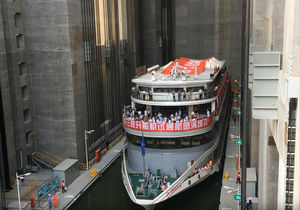 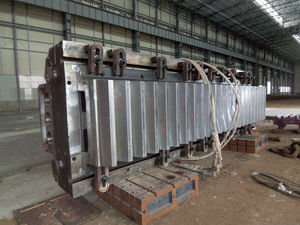 Mecklesheim/Wuhan (ptp016/26.02.2019/10:30) - Test operations have been in full swing for the past two years for the largest ship lift in the world, by the Yangtze River in the Chinese Hubei province. This vertical hoist enables ships with up to 3,000 tonnes of displacement to cross the Three Gorges Dam within one hour. AICHELIN subsidiary EMA Indutec has supplied the hardening plants for the gigantic toothed racks of the ship lift.

The water level behind the dam is up to 113 meters higher than the river downstream. To overcome this great height, a ship lift with a basin sized 120 m (length) x 18 m (width) x 3.5 m (depth) is required. The lock gate, the mechanic systems and the water itself weigh more than 15,500 tonnes in total.

The ship lift was installed as an addition to the five-storied lock, which is also the largest of its kind in the world and has been in operation since 2003. The freight volume on the dam has since quadrupled from close to 35 million tonnes to over 140 million tonnes per year. This rise is due to the booming water transportation sector in the mountain regions around the Three Gorges and the adjacent south-western Chongqing region.

Before, it took between three and four hours for a ship to cross the dam through the lock. The shiplift reduces this time to between 40 minutes and an hour. The drive of the lock gate is via four toothed wheels, each running on a toothed rack with a length of 113 meters. For the heat treatment of this large metal construction, EMA Indutec GmbH, the AICHELIN subsidiary from Meckesheim, supplied a hardening machine that was specially designed for the hardening of the tooth gaps of the weighty toothed rack segments.

Toothed racks instead of a pulley hoist system

The Three Gorges project is a multifunctional water control system consisting of a dam with a length of 2,309 m and a height of 185 m, a five-storied lockage, 32 hydropower turbine generators, and a ship lift. The original plan was for a ship lift with a rope hoist. However, the Chinese experts were concerned with the gigantic dimensions and decided to use toothed rack drives and screwlocks made in Germany. Construction started in 2008.

Aside from flood protection and power generation, the increase of transport capacities on the Yangtze river, China's longest river, was the main reason for the implementation of the Three Gorges Dam project. Before, the upper reaches of the Yangtze river were off-limits for larger vessels, as the river was too narrow and too shallow; the many winding and more turbulent parts on the other hand were dangerous for smaller vessels. The dam considerably improved shipping on the river, as it helps to regulate water levels during flood and dry periods.

According to the Chinese shipping authorities, up to 150 cargo vessels with more than 300,000 tonnes of cargo crossed the lock daily in 2015, which is more than eight times as much as in 2003, when it went into operation. The demand for river transport will increase further in the future, economists are convinced, as China has put the regions along the Yangtze river at the core of its national development strategy for river basins.

The trough to lift the vessels hangs between four towers made from reinforced concrete, with a height of 169 m. A pinion system was chosen for the trough drive; four toothed wheels run on the toothed racks along the solid construction of the towers. For the hardening of these toothed racks, EMA Indutec has developed, built and manufactured the largest ring hardening machine for track hardening and single tooth hardening to date.

The individual segments of the toothed racks are placed on separate workpiece fixtures; the individual teeth are hardened in a single-tooth hardening process. While size and weight of one single segment (approx. 5 m long x 0.8 m wide; weight approx. 12 t) were relatively easy to adapt by the construction department, the gear module of 62.7 tonnes presented a big challenge for the process development department at EMA Indutec. A gear tooth depth of 140 mm was still unheard of.

As the machine needed to be available for other hardening applications after the manufacturing of the toothed racks, a portal with two processing stations was chosen. Conventional applications for this type of machine are, for instance, track hardening of large-diameter bearings, or internal and external gearing of large toothed wheels. For this purpose, two toothed racks each were "mounted" onto a solid workpiece fixture with a weight of approx. 16 t.

The entire loading unit has a weight of approx. 34 tonnes and consists of the workpiece fixture and the two back-to-back toothed racks. It was placed between the two processing stations, onto a solid mount, and each rack is handled by the station opposite it.

For the unusual module size of 62.7, a total tooth depth of 140 mm, and the required hardness penetration depth of 6 to 8 mm, a new inductor concept had to be developed, which was based on the design of the known single-tooth inductors. The desired process was the so-called "tooth-by-tooth hardening", where the contour is spin-hardened, but the tip remains unhardened. Since tension cracks occurred on the contour during the development phase (one of the biggest risks with such large tooth systems), the spray concept had to be revised as well.

The Three Gorges project on the Yangtze river in the city of Yichang, Hubei province, is a multifunctional water control system consisting of a dam with a length of 2,309 m and a height of 185 m, a five-storied lockage, 32 hydropower turbine generators, and a shiplift. The dam regulates floods, generates electricity, and helps to regulate shipping on the river.

The construction plan was adopted by the National People's Congress in Beijing in 1992 and absorbed costs amounting to more than 200 billion Yuan (33 billion USD); about 1.3 million people were resettled to make room for the project. The Yangtze river is the third longest river in the world and was closed for the purpose of the project on 8 November 1997, marking the completion of the first phase. In April 2003, the water level behind the dam was raised to 135 meters for the first time, and the permanent lock gate was opened for a one-year test period. The first dam generator went into operation in July 2003. During a full-capacity storage test in 2010, the water level of the dam reached 175 meters for the first time.

As of July 2012, when the last of the 32 large turbine generators went into operation, the Three Gorges Dam has reached full capacity and a combined generating capacity of 22.5 gigawatt. On 18 September 2016, the test operation of the largest shiplift in the world was launched at the dam, thus concluding the Three Gorges project 22 years after the start of constructions.

About EMA Indutec GmbH
EMA Indutec is an international producer of induction heating plants and frequency converters, as well as a provider of after sales-services. Their headquarters is in Meckesheim, Germany. The company has around 150 employees and sites in Germany and China. Since 2000, it has been part of AICHELIN Group, one of the largest producers of heat treatment plants in the world. http://www.ema-indutec.de

About AICHELIN Group
As part of Berndorf AG, AICHELIN Group is a leading provider of heat treatment solutions, such as industrial furnaces, induction hardening plants, and industrial gas burners. Its headquarters are located in Mödling near Vienna. The company's roots date back to 1868. The long-established brand AICHELIN, as well as EMA Indutec, SAFED, BOSIO, AFC Holcroft, and Noxmat, make up the group and together employ more than 1,100 people. AICHELIN Group ranges among the world's top 3 heat treatment companies. AICHELIN's subsidiaries in Europe are located in France, Germany, Slovenia, and Switzerland; the worldwide presence of the company includes subsidiaries and branch offices in China, India, Russia, and the US, as well as a sales network in 22 more countries. http://www.aichelin.com