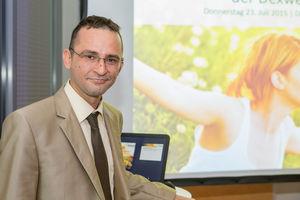 Equity ratio increases to more than 50%

Vienna (ptp001/26.07.2015/21:05) - At an extraordinary shareholder´s meeting of the Austro-American filter manufacturer dexwet International AG, shareholders overwhelmingly approved an announced capital increase of 700 percent on Thursday (June 23, 2015) with 84 percent of votes present. This raises the equity base to more than 50%, thus ensuring the company´s stability and competitive capacity during upcoming expansion plans. In doing so, shareholders are investing fresh capital to the amount of 1.17 million Euros into dexwet. In 2015, dexwet is aiming to double its turnover for the fourth consecutive year. http://www.dexwet.com

This successful increase in capital was made possible thanks to financial expert and dexwet chairman of the board, Dr. Wolfgang Schiketanz, who has proactively supported management in implementing corporate actions. Upon being appointed chairman of the board in April, Dr. Schiketanz announced his intention of further expanding both automotive and air filter system sectors.

Following an infusion of capital by "Austria Wirtschaftsservice" for robotic automation the previous year, dexwet introduced production processes enabling the manufacture of very large quantities of filters for industrial and commercial use within a short period of time. Previously, products had to be partially assembled by hand. Dexwet has found a good partner in Elmer Präzisionstechnik in Lower Austria, helping them realize this objective.

Growth capital required for the expansion into new industries

"By implementing the approved capital increase, we are laying the groundwork for issuing corporate bonds in the future. We expect our shareholders to decide on mid- and long term financing parameters required for a global roll- out at a further extraordinary shareholder´s meeting to be held still this year, "explains Clemens Sparowitz, CEO at dexwet.

Commitment to NASCAR is expanded

In addition to providing filter systems for gaming machines, automated teller machines and point of sale systems, dexwet intends to expand in two further business areas over the next three years.

Their collaboration with the NASCAR Whelen Euro Series, which started in 2014, will now become a strategic partnership. As of the 2016 season, "Gold Partner" dexwet, will equip all cars participating in the European NASCAR series with dexwet high performance filters - effecting a noticeable high-end performance enhancement. This commitment to motor sports is a cornerstone of dexwet´s automotive market strategy. First concrete development and series contracts are expected.

The new ventilation filter system "dexwet pure air" is making headway as well following its market launch; particularly in Austria, Germany, the Netherlands and Italy. And a new line of business has been added: air duct cleaning in heating systems. The new sales team in Germany successfully introduced this product to two of three major heating- and installation distributors, where they are now available. Manufacturers of ventilation grates and vacuum cleaners have been showing an interest as well. Robotic automation has paved the way for enormous sales in ventilation air filters in both the private and public sector.

Pictures of the event may be downloaded at Fotodienst https://fotodienst.pressetext.com/album/3489