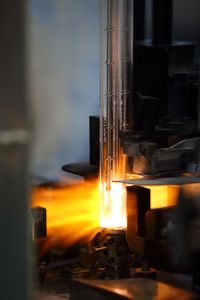 Outlook
The current orders portfolio and the projects that are presently being carried out at the Hönle Group point to a strong second half of the year. Sales and earnings figures in the second half of the year are thus expected to be higher than in the first six months of the year.
In all, the Management Board expects that the Hönle Group will achieve the sales target of between Eur 80 million to Eur 85 million as well as the targeted operating result (EBIT) of between Eur 9 million to Eur 10 million in the 2013/2014 financial year.

The complete 6-month report can be downloaded here: http://www.hoenle.de/en/ir-reports/

About Hönle
Dr. Hönle AG is a listed technology company with head office in Gräfelfing, near Munich. With a staff level of more than 500 employees, the Hönle Group is one of the world's leading systems suppliers in the UV technology segment. The equipment and systems are used for drying inks and coatings, curing adhesives and plastics, disinfecting surfaces, and in the simulation of natural sunlight. The Company's business activities also include the development and sale of industrial adhesives and casting compounds. In addition, the Group manufactures UV lamps that are used in water sterilisation and for other applications, and produces tubing and semi-finished goods made of quartz glass that are used by various branches of industry. The Hönle Group is represented worldwide at 69 locations in 27 countries by own companies and sales partners.