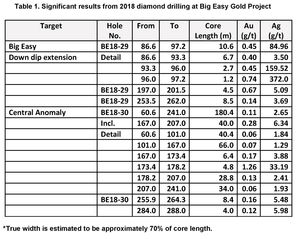 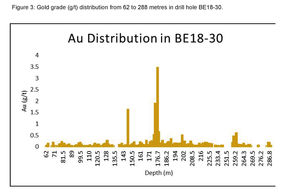 Cartier Iron Corporation (CSE: CFE) ("Cartier Iron" or the "Company") is pleased to report results from the first two diamond drill holes from a four hole, 1,249m program, at its Big Easy Gold project located on the Burin Peninsula in eastern Newfoundland. The first hole, BE18-29, tested the downdip potential of the Big Easy showing while three holes tested the Central Induced Polarization (IP) chargeability anomaly located 1.8km south of the Big Easy showing (see press release May 1, 2018). Hole BE18-30 was drilled on the western edge of the Central Anomaly. Hole BE18-31 was collared 40m west of Hole BE18-30 while hole BE18-32 was collared on the eastern edge of the Central Anomaly 200m east of Hole BE18-30. The Central Anomaly as well as other major chargeability anomalies on the property occur under prominent bogs hence drilling in the core of these anomalies must be carried out in the winter. Table 1 gives significant results and Table 2 gives details on collar coordinates and drill hole orientation.

Hole BE18-29 which tested the potential downdip extension of the Big Easy Showing returned 10.6m of 0.45 g Au/t and 84.96 g Ag/t including 3.9m grading 0.54 g Au/t and 224.9 g Ag/t. The downdip extension is marked by a chargeability anomaly which appears to be stronger with depth.

Tom Larsen, President & CEO of Cartier Iron said: "Considering the reconnaissance nature of this drill program and the limited meterage of 617m reported, these results are very encouraging and we look forward to receiving the results from the remaining two holes which should be available in the near future. We plan to do a winter drill program in conjunction with efficient accessibility after bog freeze-up of at least 1,000m to further test the Central Anomaly as well as other similar geophysical targets to the west and south."

Dr. Bill Pearson, P.Geo., Chief Technical Advisor, commented: "The results from Hole BE18-30 indicate that the chargeability anomaly reflects an extensive zone of epithermal alteration and mineralization that is up to 200m wide with a depth extent of at least 250m.The grades are consistently anomalous throughout the entire section suggesting the potential for a well mineralized core zone in the strongest part of the chargeability anomaly (Figures 1 and 2). The mineralized alteration zone was also intersected in the upper part of Hole BE18-31 and the lower part of BE18-32 but results on these holes are pending. This zone is completely open along strike and at depth."

Dr. Bill Pearson, P.Geo., a Qualified Person as defined under National Instrument 43-101 (NI 43-101), has reviewed and approved the scientific and technical content of this press release. The IP/Res survey was designed and supervised by Dr. Chris Hale, P.Geo., Chief Geophysicist for Cartier Iron and a Qualified Person as defined under NI 43-101. The diamond drill program was carried out and supervised by Mr. Jeff Burke, P.Geo., Exploration Manager for Cartier Iron on Big Easy and a qualified person as defined by NI 43-101. All samples were analysed using multi-digestion with ICP finish and fire assay with AA finish for gold by AGAT Laboratories in Mississauga, Ontario). Cartier Iron employs an industry standard QA/QC protocol including external standards, blanks and duplicates, with a 5% random split check assay on pulps and rejects by ALS Chemex in North Vancouver, BC.

About Cartier Iron Corporation
Cartier Iron is an exploration and development Company focused on discovering and developing significant iron ore resources in Quebec, and a potentially significant gold property in the province of Newfoundland and Labrador. The Company's iron ore projects include the Gagnon Holdings in the southern Labrador Trough region of east-central Quebec. The Big Easy gold property is located in the Burin Peninsula epithermal gold belt in the Avalon Zone of eastern Newfoundland.

For additional information on Cartier Iron, please visit our website at: http://www.cartieriron.com

The CSE has not reviewed nor accepts responsibility for the adequacy or accuracy of this release. Statements in this release that are not historical facts are "forward-looking statements" and readers are cautioned that any such statements are not guarantees of future performance, and that actual developments or results, may vary materially from those in these "forward-looking statements".